Telling stories about renewables in agriculture

Karin Stark (pictured with her daughter) has seen the power of stories in action and will bring her story to Shepparton’s Beneath the Wisteria on Wednesday, August 12.

She will talk, in a virtual sense, about renewables in agriculture and tell the story about how and why she and her partner installed Australia’s biggest solar/diesel hybrid pumping system on their Narromine farm.

Ms Stark has, for some 17 years, engaged with communities throughout central-west New SouthWales around contemporary environmental issues. 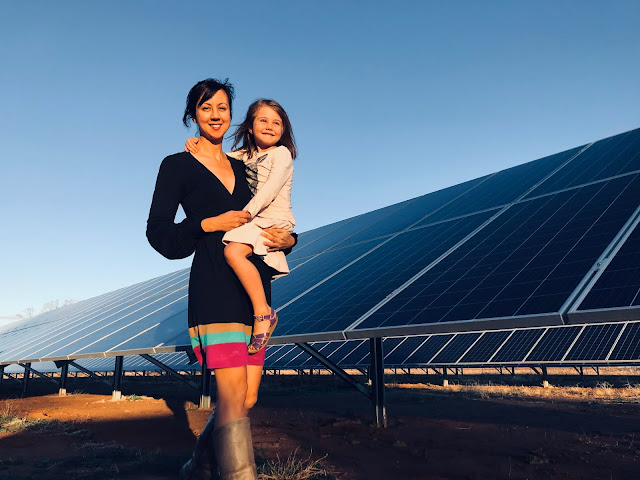 National Renewables in Agriculture conference last year and for that initiative was a finalist in the 2019 NSW-ACT Agrifuture’s Rural Women’s Award.

The second of those conferences was to be held this year, but because of Covid-19 it has been postponed and a tentative date of May 19 has been set for 2021.

Having worked with the NSW State Government and Landcare, Ms Stark saw firsthand the hunger among farmers for dependable information about environmental and sustainability matters.

Subsequently, she settled on the idea of the National Renewables in Agriculture conference where people could both hear and share stories. That first conference attracted 250 people and the next, planned for Dubbo, will be, she hopes even bigger.

Ms Stark admits to not physically doing a lot on her farm as beyond being a mum, she is a director of Farm Renewables Consulting and works part-time with ReAqua, the company which installed the 500kW solar/diesel hybrid pumping system on her farm.

Those keen to join this story-telling session Beneath the Wisteria can connect to the Zoom meeting at: https://bit.ly/3k4u2RE. Those planning to join the discussions should connect a few minutes early and time will be allowed for Q&A.

Questions about the August 12 meeting should be directed to the convenor, Robert McLean, as 0400 502 199 or vial email at r.mclean7@icloud.com.

Posted by Slap Tomorrow at 7:01 PM No comments:

Tim Hollo speaks at Beneath the Wisteria

Tim Hollo, the executive director of The Green Institute joined us Beneath the

The discussion was recorded and can be viewed here.

Our next guest on Wednesday, July 22, at 10:00 am will be Professor Andrew Balkers from Australian National University.

Professor Blakers is E2 Professor of Engineering at the Australian National University.

Details of the Zoom event will be related soon.

Posted by Slap Tomorrow at 10:23 AM No comments:

DELWP is running two webinars to give an overview of the information from Victoria’s Climate Science Report 2019 and the local-scale Victorian Climate Projections 2019, as well as guidance on understanding and using the information. Both webinars allow plenty of time for Q&A with DELWP and CSIRO scientists.

Webinar 1: Climate change in Victoria – past, present and future

Join via this link on the day: MS Teams Live Event

Join via this link on the day: MS Teams Live Event

Posted by Slap Tomorrow at 4:16 PM No comments:

Greens executive director, Tim Hollo, to join those who gather Beneath the Wisteria

Tim Hollo (pictured) will join those who gather Beneath the Wisteria in Shepparton for their Saturday, June 27, event.

The executive director of The Greens Institute will visit the city via Zoom conversation. 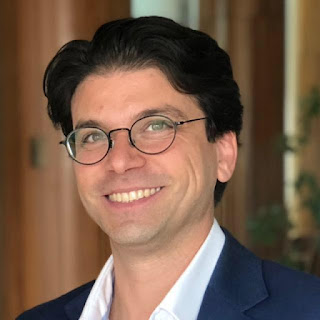 Based in Canberra, Tim is a respected environmentalist and musician and has worked for the Greens, Greenpeace, 350.org and was the Communications Director for former Senator and Greens leader, Christine Milne.

He was also on the board of Greenpeace Australia Pacific.

Tim is an accomplished musician and has performed at the Woodford Folk Festival and among other places, New York’s Carnegie Hall.

He is also the founder and Executive Director of Green Music Australia and as a writer, he has had his work published in the Guardian, on the  ABC, the Griffith Review and Crikey.

The Green Institute, according to its website, is an Australian non-profit organisation, established formally in October 2008.

Its mission is to “support green politics through education, action, research and debate“.

Tim will bring his knowledge and experience of the climate crisis to discussions Beneath the Wisteria on Saturday, June 27, at 11:00 am.

Anika Molesworth to 'Zoom' into Beneath the Wisteria on May 30

(Beneath the Wisteria supporter, Mik Aidt from Geelong's "The Sustainable Hour", has kindly tidied up the recording from the May 30 visit by Anika Molesworth showing only Anika's presentation, it's in two pieces, Part One and Part Two - thanks Mik)

A far western New South Wales farmer with an acute understanding of the climate crisis and how it impacts on those who work the land will be a guest at Shepparton’s Beneath the Wisteria on Saturday, May 30.

Anika Molesworth will join the group at its monthly gathering via Zoom in an event starting at 11:00 am.

Anika splits her life between her family’s arid outback sheep station, her PhD crop trials in central NSW, and the lush and green rice paddies in Southeast Asia, where she works as a researcher in international agricultural development.

She was awarded the 2015 Young Farmer of the Year, 2017 NSW Finalist for Young Australian of the Year, and most recently the NSW Young Achiever Award for Environment and Sustainability.

Anika is a passionate advocate for sustainable farming, environmental conservation and climate change action. She helped form Farmers for Climate Action and connects land managers to researchers through her platform Climate Wise Agriculture in order to build resilience into farming communities.
She is also keenly interested in the conservation of natural and cultural heritage in farming communities and manages the International National Trusts Organisation’s Sustainable Farms program.

Anika has lived on and worked her family farm since she was 12 and was to be married on the property this year, but her plans for that moment were frustrated and postponed because of the Covid-19 dilemma.

A powerful array of speakers were assembled for February’s Nation Climate Emergency Summit in Melbourne and Anika was among them.

Anika has been interviewed by the Shepparton-based podcast “Climate Conversations”.

The Zoom, Beneath the Wisteria is free and will last for about an hour with Anika explaining a little about herself, how the climate crisis is impacting on farmers and what they can do to live with these never seen before changes to the climate. There will be time for questions.

Email ThisBlogThis!Share to TwitterShare to FacebookShare to Pinterest
Labels: Anika Molesworth, Beneath the Wisteria, climate crisis, May 30, those who work the land, Zoom 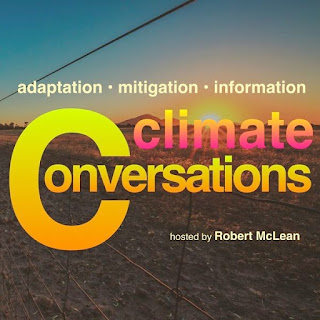 The emphasis given to national and international news on Beneath the Wisteria is about to change.

Several generous people have helped me buy a rather special podcasting device, a Rodecaster Pro.
Podcasting has just a few elements that are critically important and among the most important is the quality of the audio; audio that can be perfect using the Rodecaster Pro.

The challenge is, however, that learning a whole new skillset at 72 can be rather stressful and so the several hours a day spent on trawling through national and international news sites for climate crisis news will now be devoted to learning more about audio and podcasting.

To date, I have produced more than 200 episodes of “Climate Conversations” of varying quality, from tragic to not so bad, but it’s my aim to lift the overall standard as in the final analysis, the podcast lives  or dies on the quality of the actual content and the audio itself.

Beneath the Wisteria will, from here, be more about what actually happens at our monthly gatherings, what is happening in the wider Goulburn Valley and within Shepparton itself.

Posted by Slap Tomorrow at 7:59 AM No comments:

The novel coronavirus pandemic of 2020 has striking parallels with climate disruption. 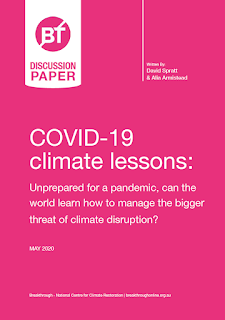 The threat was well known and catastrophic, even existential. History’s valuable lessons were ignored. Researchers were clear on what needed to be done, and how to respond. The UN had devoted a whole section to the issue, governments ran risk scenarios and national security analysts warned of the consequences. The developed world had the capacity to be ready. And to support less prosperous nations, or should have been.

When it became fatal, it was conceived by wealthy nations as a threat somewhere else, because they were insulated. Then there was the denial, the delay, wanting to avoid any economic dislocation. Modern society was good at research, solutions would appear, no need to panic. Humans had tamed nature.